Limiting treatment for the old or chronically ill may also violate civil-rights law. There are better ways.

The coronavirus has introduced terrifying terms into our everyday vocabulary—“social distancing,” “ventilator,” “pandemic.” Be prepared to add a new word to the vernacular: rationing.

The U.S. has reported more than 80,000 cases of Covid-19. About half are in New York and more than 10,000 cases were reported in a single day. If projections by Cory Chivers, a data scientist at the University of Pennsylvania Health System, are correct, those numbers represent 15% of all cases. American hospitals have only about 96,000 intensive-care beds, and an estimated 62,000 full-featured ventilators to deal with the respiratory failure associated with severe coronavirus infections. (A further 12,700 ventilators are in the Strategic National Stockpile.) Hospitals could soon be short of beds, personnel and ventilators.

That spells rationing. Demetre Daskalakis, deputy commissioner for disease control at New York’s Department of Health and Mental Hygiene, warned on March 9 that hospitals will “have to think about triaging the use of ICU beds and ventilators,” and that will require “making some very serious difficult decisions.”

In Seattle, state Health Department officials and health-industry professionals conferred last week on a “triage” plan that would decide who receives full care based on age, health status and severity of illness. The rest would simply be given “comfort care.” Last week Susan Henderson, executive director of the Disability Rights Education and Defense Fund, wrote a public letter to California Gov. Gavin Newsom to express worry that the state had also begun “discussion of ‘rationing’ medical care.” 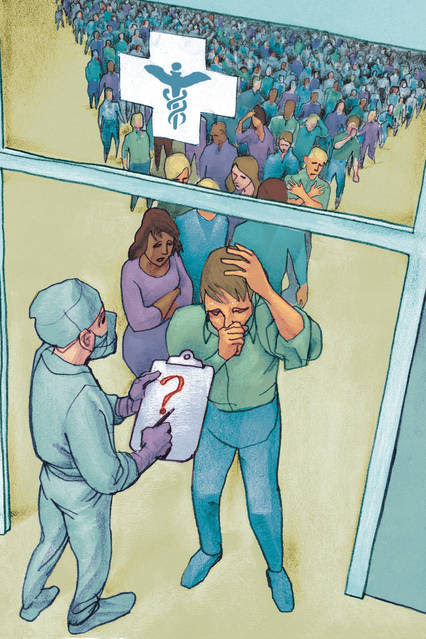 That authorities in some hard-pressed areas are considering rationing likely strikes most Americans as ghoulish. How, for instance, does a patient “qualify” for a ventilator? How old is too old? In 2014, Ezekiel Emanuel, one of the architects of the Affordable Care Act and now an adviser to Joe Biden on coronavirus, declared that 75 was long enough to live. After that, people become “feeble, ineffectual, even pathetic.” But was Einstein? Verdi? Matisse? Or should the decision be based on health? Do we exclude a patient with multiple sclerosis? Or someone who is blind?

The instinctive resistance people feel to these questions was illustrated in a series of public forums after the 2009 swine flu outbreak, held by a faculty team from Johns Hopkins University. More than 300 participants were invited to weigh the possibilities of rationing. Lee Daugherty Biddison and Ruth Faden, organizers of the forums, recalled that participants rejected a simple first-come-first-serve model. Then they rejected a lottery system as too arbitrary. And they struggled to create an algorithm for rationing. In the end, the participants asked why it wouldn’t be better simply to build more hospital rooms or manufacture more ventilators in advance.

Then there are the legal questions raised by rationing. The Freedom of Conscience Defense Fund and the Thomas More Society have published a memorandum that warns health-care officials against violations of federal civil-rights law in cases of “discriminatory health care decisions.” The Age Discrimination Act of 1975 prohibits “discrimination on the basis of age in programs or activities receiving Federal financial assistance.” The ban covers all activities of recipient institutions, such as hospitals. Likewise, the Rehabilitation Act of 1973 as bluntly forbids excluding an “individual with a disability” from any service by a federally funded entity.

And is this sudden reach for rationing even necessary? Many of the worst-case scenarios that prophesy millions of infections, and a collapsing hospital system, are predicated on doing nothing in the face of the coronavirus. Whether or not public-health officials think current social-distancing measures have been adequate, the lockdowns have certainly been much more than nothing. There are also reasons to be optimistic about the availability of equipment. Beyond the 62,000 full-featured ventilators, U.S. health-care providers have another 98,000 basic models and respiratory machines, and the country has more manufacturers of ventilators than do hard-hit European peers.

“We don’t want to do it. We don’t think we should have to do it,” the CEO of the Washington State Hospital Association, Cassie Sauer, to the Seattle Times last week. But people have become too accustomed to taking the easy way out of dilemmas, and too comfortable with making excuses for killing when the only offense of those we kill is the possibility of inconvenience. Americans are better than that. Ventilators are not simple to manufacture, but neither were Spitfire fighter planes at the beginning of the Battle of Britain. Improvise, innovate, imagine.

And when the cloud of this plague passes over, as it surely will, do not let the return of the light find us, standing with upraised knives, over our neighbors.

Mr. Guelzo is a senior research scholar in the Princeton University’s Council of the Humanities and a visiting fellow at the Heritage Foundation.