Reports on the ground indicate that intelligence given to President Trump – that Antifa has used the unrest over the killing of Geroge Floyd by a policeman to instigate a violent insurrection – is correct.

There are, of course, other elements involved, specifically the looters who have joined Antifa and delight in smashing and burning anything in their way (and taking free stuff).

In the following report, we break down

Antifa is an extremist movement that demands nothing less than the destruction of America and its democratic system of government.

Designate Antifa as a Terrorist Org? Not So Fast | Clarion Project

President Trump stated that he would designate Antifa as a domestic terrorist organization, but let’s have a clear look at the issues involved.

“Nothing short of burning the country down and re-coding civilization will satisfy them. Same goes for radical politicians supporting Antifa. Every other supporter is being suckered into thinking it’s anything different.” – Shireen Qudosi, National Correspondent / PVE

What would the country look like if their agenda was met? The details listed in the manifesto of the Revolutionary Abolitionist Movement (part of the Antifa movement) below:

Why aren’t you addressing this? 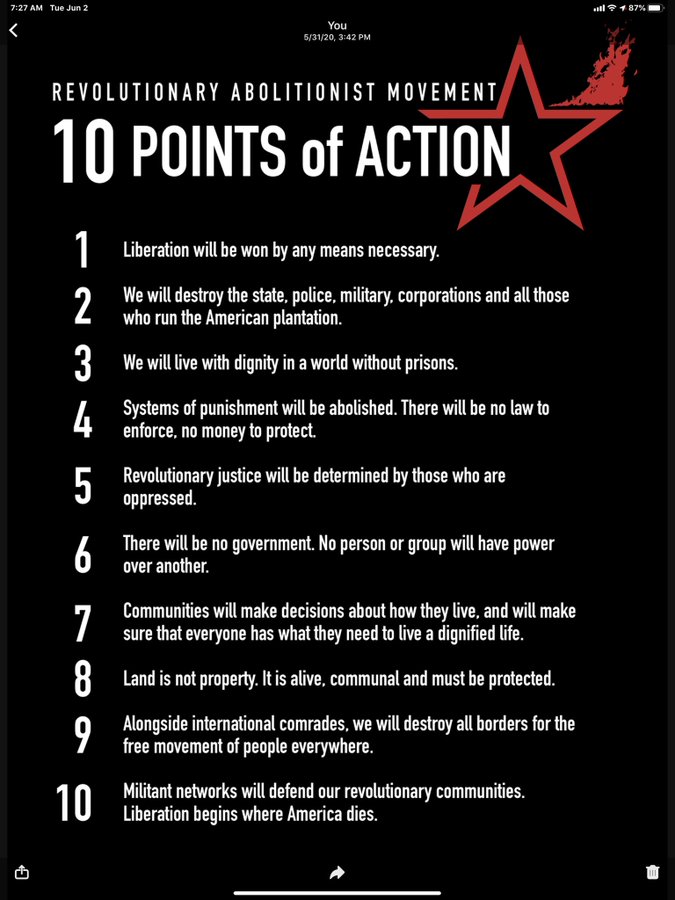 This poster, available for say by an Antifa group, sums it up:

How Antifa Plans to Get What They Want

Antifa, like their “counterparts” on the Far Right, wants to stoke a race war to hasten the disintegration of America. They prey on the Black Lives Matter (BLM) movement, which has peaceful and violent elements.

Antifa thrives on stoking violence and instigating within the BLM movement and inventing propaganda in the name of BLM to instill fear and hate.

THIS IS HOW ANTIFA ANARCHISTS ARE TRYING TO SPREAD FEAR AND CREATE A RACE WAR. That is what professional agitators do – provoke people into acting while they and their political backers stoke the fires of hate. These people seek to divide – not unite. Just ask them. I have

Rebel News reporter Anna Slatz, who has been covering the unrest in Washington, D.C., watched firsthand and recorded how peaceful protests turned violent after Antifa showed up after dark (however, it should be noted that due to a 7 p.m. curfew in the city, any protester on the street at night was most likely looking to participate in violent activity).

The following is a taste of the typical modus operandi of Antifa:

Do decent, grieving people take these items to a peaceful protest? America, turn the lights on. The people you say you care about are being used as shields for a violent, extreme political agenda. https://twitter.com/columbuspolice/status/1267568211370934272 …

This bus was stopped yesterday at Broad St. & 3rd due for obstruction of traffic. There was a suspicion of supplying riot equipment to rioters. 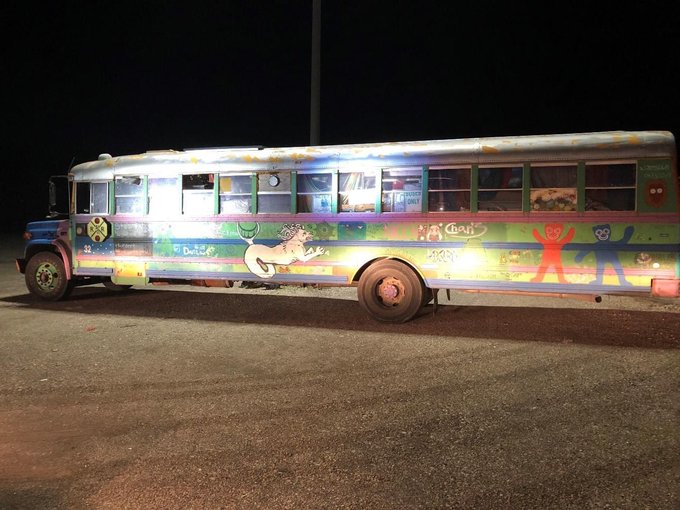 Antifa’s strategy also involves getting the police to do their “dirty work.” For example, Antifa tries to provoke the police to the point where the police end up being accused of using “excessive force” or killing a rioter (whether on purpose or accidentally, it doesn’t matter to Antifa, as long as the police officer is white and the victim is black).

Once this happens, they will let the mainstream media (who has largely given them a pass) as well as Democrat politicians and celebrities (who have been paying their bail) continue working for them as they have by condemning the police and calling for the dismantling of police forces.

It is ironic to note that, in all but one city where the riots are occurring, Democrats — who largely share the belief of many of the protesters that American society is racist to its core — are running the show.

The Democrat mayors also largely ascribe to the “venting” philosophy. Most have made the decision to let violent protesters riot, loot and burn and told their police departments to stand down.

Antifa, which is highly organized at the local level in terms of calling the shots at the riots (and supplying rioters with bricks as well as incendiary devices), has noted the decisions of the mayors and taken advantage of them.

This has made the American public terrified as they see the violence getting closer and to home.

Indeed, one Clarion source reported a 50-person line up at a local gun store in an upscale neighborhood on Long Island:

Spent most of the first 30 years of my life on Long Island. The only people who really own guns are veterans and cops. Most other people believe guns are extreme. Totally out of line with most of the country. This is major. People are terrified.https://twitter.com/clarionproject/status/1267832888713555968 …

Line up for a gun shop in Long Island right now. +50 people and over a 2 hour wait. 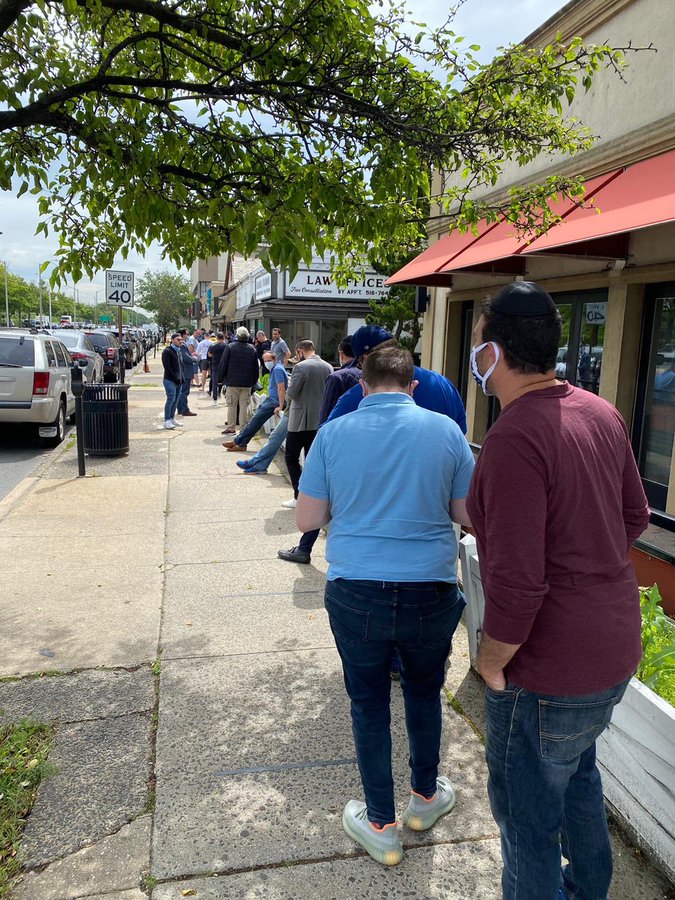 As gun sales in May were reported to be 80 percent higher than they were in May of last year, people are noting how the police have failed them:

“You don’t need a gun to protect yourself, just call the police” is curiously no longer something people are arguing. https://twitter.com/clarionproject/status/1267832888713555968 …

Line up for a gun shop in Long Island right now. +50 people and over a 2 hour wait.

Another tweeted: “This is a sign that people are exercising their constitutional rights. It’s also a sign that New York’s leadership has utterly failed the people and deserves to be thrown out of office in unforgiving disgrace.” @BrianDeanWright

The future of the police force in America

While positive moments were recorded during the protests of police and peaceful demonstrators give support to each other, news came that at least five police officers had been shot in St. Louis alone.

One, a black father, grandfather and 38-year retired veteran of the force, David Dorn, was left to bleed out on the street until he died. Another is in critical condition after being shot in the head.

Journalist Tucker Carlson correctly wondered what would be the long-term effect on the police force:

Carlson also lambasted “politicians, celebrities, corporate leaders, clergy, news anchors, professional athletes, almost every person in this country that we were raised from childhood to look up to and respect … [for] siding with the people burning police stations,”

“So the question is, how did murdering David Dorn advance the cause of racial justice? … No one explains, Biden didn’t. Meanwhile, Biden’s staff continued to send money to the rioters. Other Democrats followed in perfect sync.”

Carlson also had sharp words for CNN host Don Lemon and Rep. Rashida Tlaib, D-Mich., for dismissing law enforcement and, in Tlaib’s case, supporting a post calling for the defunding of the police.

There is one thing we know with certainty about the current situation: Extremists have permanently changed the face of America. The riots of 2020 will be a watershed moment in our country’s history. There is no going back to the “old normal.” The question is, will we be able to go forward?

Designate Antifa as a Terrorist Org? Not So Fast