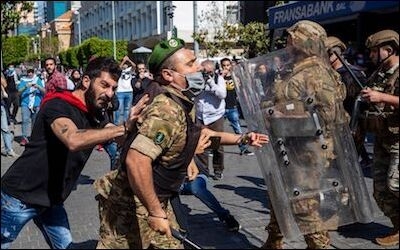 Anti-government protesters scuffle with Lebanese army soldiers near the Central Bank in Beirut on May 1. (AP)

One of the immediate effects of Covid-19 on the Middle East has been to clear the streets of the mass demonstrations which had filled the public squares of a number of regional capitals in the preceding months. The virus has no political preferences, and its generalized assault has led to cooperation in some arenas between bitter rivals.

In certain Middle East countries, however, the virus has provided a boon for authoritarian regimes. Specifically, Iran, Iraq and Lebanon had all witnessed widespread protests against economic mis-management and corruption in the first months of 2020. In Iran, brute force dispersed the demonstrations. In Iraq and Lebanon, the virus brought them to an abrupt end.

In Lebanon, however, the demonstrations have now re-commenced. And there are strong indications that policies enacted as a result of the virus are now exacerbating, rather than containing public anger.

Lebanon has both a failed state and a failed economy.

The virus arrived to a country already in deep crisis. Lebanon is, put plainly, a failed state and a failed economy. The national debt stood at 170% of GDP in 2019. Roughly 50% of government spending went toward servicing this debt in 2019. In March, 2020, for the first time, Lebanon defaulted on its debts. In that month, the government suspended payment on a $1.2 billion Eurobond, due on March 9th.

As the Lebanese currency declined in value, banks sought to protect themselves and avoid a run by restricting withdrawals of dollars and other foreign currency. This increased the burden facing the public, and fueled anger.

The Lebanese pound has devalued by more than 50% over the last six months. The government has refused to formalize the currency controls impose by the banks. As a result, wealthy and/or well connected Lebanese have been able to access and move funds.

Those without connections are left to bear the brunt of the discretionary controls imposed by the banks. Prime Minister Hassan Diab announced this week that in January and February, $5.7 billion was transferred out of Lebanon’s banks.

The current domination of the Lebanese political system by the Iranian proxy Hizballah group and its allies has further contributed to the deteriorating situation. Since the elections of May 2018, Hizballah and its allies have openly controlled both the legislative and executive branches of government. Hizballah is the dominant force in a bloc controlling 74 seats in the 128 member parliament, and 19 of 30 Cabinet portfolios. The movement, incidentally, has direct control of the public health ministry. The minister, Jamal Jabak, is the former personal physician of Hizballah General Secretary Hassan Nasrallah.

Iran/Hizballah’s increasingly open control of Lebanon has led to a precipitate decline in foreign investment in the country over the last decade. Saudi Arabia and the United Arab Emirates were once Lebanon’s main trading partners in the Gulf. They have sharply downgraded their involvement in recent years. Once, the Gulf monarchies might have been willing to dig deep to prevent a Lebanese default. But Hizballah-owned Lebanon will find no such generous benefactors. And of course the sanctions-strapped masters in Teheran have no cash to spare.

Indeed, even Hizballah itself is seeing its funding from Teheran slashed. US sanctions and the urgent need to respond to the Covid-19 crisis make sharp reductions in Teheran’s funding to its Lebanese IRGC franchise likely.

Lebanon responded early to the Covid-19 crisis. Parliament was shuttered on March 9. Schools, universities, malls and public institutions are closed. A strict curfew operates in the night hours and the authorities advise citizens to stay at home during the day.

The result is that the virus appears to have been contained. The spread has been reduced to less than 10 new reported cases per day. The economic impact of the government’s containment measures, however, has been severe. Social Affairs Minister Ramzi Musharrafieh told CNN on Tuesday that 75% of Lebanese citizens are in need of aid. The already high unemployment rate has risen to 30%, including 60% of young people. Many small and medium sized businesses have collapsed.

The combination of restrictive moves by the banks which have severely impacted on the lives of citizens, the pre-existing economic crisis, international isolation because of Iran/Hizballah’s control of the country, the deterioration in living standards as a result of stringent efforts over two months to contain Covid-19, and now the relative success of these efforts has produced a return to popular protest in recent days.

The largest scale protests have taken place in Tripoli, a poverty stricken and majority Sunni city in the north of the country. But Beirut, Sidon, Nabatiyeh, Akkar and the Beka’a have also witnessed demonstrations. The banks, predictably, have been a focus for much of the anger. A number of banks have been torched and vandalized by the protestors.

So far, one demonstrator has been killed in Tripoli. Fouaz el Samaan, according to witnesses, was shot dead by the army.

The current protests differ from those which preceded the pandemic in their more confrontational and violent nature. Unlike in Iraq and Iran, the previous protests in Lebanon were characterized by an avoidance of clashes with the representatives of the state. This has now changed. A woman demonstrator in Beirut told al-Jazeera that ‘”The army are not our brothers. They are shooting at us to protect the politicians.”

At the present time, the situation remains fluid. But the protests show no signs of dissipating. While temporary fixes may be found, it is difficult to see how the deeper problems of Lebanon can be addressed short of a major overhaul of the system which would be resisted by the most powerful forces in the country.

As in Iraq, and as in Iran, the Lebanese are discovering what it means to find oneself under the ownership of a system which has neither answers to, nor any particular interest in issues of economy and living standards.

What this means in the specific Lebanese case is that the IRGC-implanted deep state which today controls the country is of necessity protecting the corrupt and dysfunctional system within which it lives. A parasite, after all, must among other things preserve the life of its host.

The growing visibility of the IRGC system and its dominance, meanwhile, is gradually driving away those forces whose input has traditionally served to mitigate the effects of the system’s dysfunctionality. As a result, the Hizballah deep state is running out of resources to siphon off. Against this reality, Lebanese are once again taking to the streets. Given the relative strength of the sides, however, ongoing strife and instability rather than rapid change seem the most likely outcome.

Jonathan Spyer is director of the Middle East Center for Reporting and Analysis and is a research fellow at the Middle East Forum and at the Jerusalem Institute for Security and Strategy.