T. Belman. Israeli Jews have negative views  on annexatrion because they have been told that they will have to make a path to citizenship to avoid being an apartheid state. Except its not true. If the palestinians living there, have or  would have, Jordanian citizenship, Israel need not grant citizenship. It is for this reason, the Jordan Option in which Israel keeps all the land west of the Jordan R, provides for them to have Jordanian citizenship if they don’t already.  If Israeli Jews didn’t have to worry about having to give citizenship to Arabs, they would be very much in favour of annexation.

As Trump prepares to release long-awaited peace plan, survey finds only half of those identifying as right-wing would support Israel applying sovereignty over the Jordan Valley 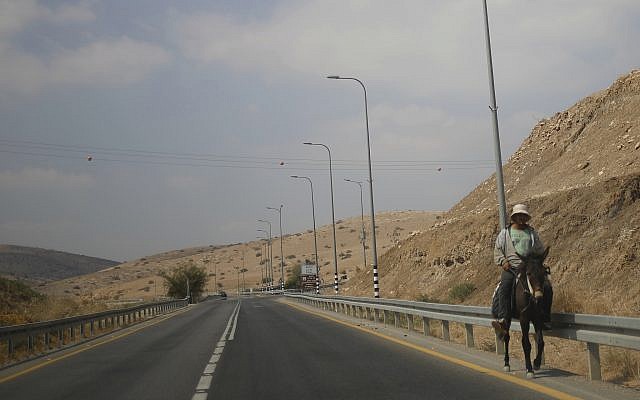 A Palestinian man rides a donkey on a main road in the Jordan Valley, near Tubus, in the West Bank, September 11, 2019. (Ariel Schalit/AP)

A poll released hours after US President Donald Trump said that he’ll likely announce his long-awaited Middle East peace plan before his meeting early next week with Prime Minister Benjamin Netanyahu and Blue and White party chief Benny Gantz, showed that just one-third of Israelis support the unilateral annexation of the Jordan Valley.

The poll commissioned by the Walla news site and carried out prior to Trump’s announcement, found that 35 percent of respondents supported unilateral annexation of the Jordan Valley, while 30% oppose it and 35% said they didn’t know.

According to the survey, only 48% of those who self-identify as being on the right of the political spectrum would support the move with 21% saying they don’t support it and 31% responding that they do not know.

The poll found that of those who identify themselves as among Blue and White’s centrist base, only 20% support Israel applying sovereignty, 44% do not support, and 36% do not know. 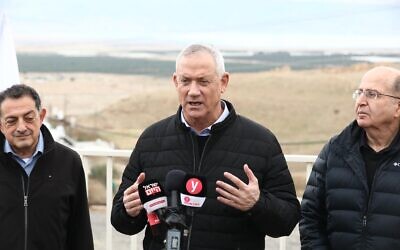 Blue and White chairman Benny Gantz (C) speaks to reporters during a visit to the Jordan Valley on January 21, 2020. (Elad Malka/Blue and White)

According to Walla, the high level of respondents saying they do not know how they feel about the Jordan Valley question, could show a lack of understanding of the issue and its implications.

Gantz vowed on Tuesday to annex the Jordan Valley “in coordination with the international community” if he wins the upcoming election.

Netanyahu responded by saying he would apply sovereignty over the Jordan Valley as well as every settlement in the West Bank “without exception.”

Ahead of the election last September, Netanyahu vowed he would immediately annex the Jordan Valley if he won. However, the results led to an extension of the deadlock that has now paralyzed Israeli politics for over a year and neither he nor Gantz were able to form a government that would have been able to carry out the controversial move.