US president calls for transparency, says he backs demonstrators, as memorial for those killed in Ukrainian plane crash turns to anger against regime

By AGENCIES and TOI STAFFToday, 1:36 am 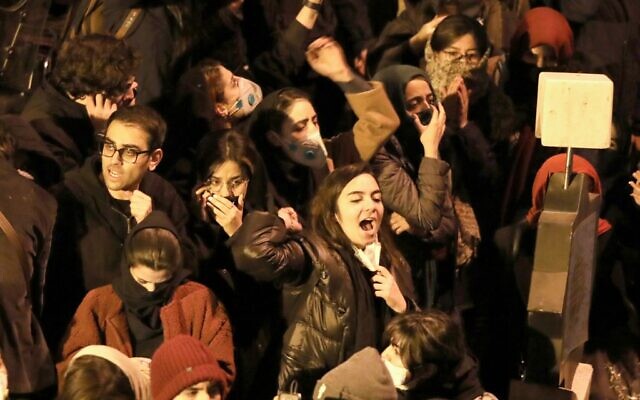 Iranians students chant slogans as they demonstrate following a tribute for the victims of Ukraine International Airlines Boeing 737 in front of the Amirkabir University in the capital Tehran, on January 11, 2020 (ATTA KENARE / AFP)

US President Donald Trump told Iranian protesters that he supported them and warned the regime against cracking down on demonstrations that broke out after Tehran admitted shooting down an airliner by mistake, killing all 176 people aboard.

“The government of Iran must allow human rights groups to monitor and report facts from the ground on the ongoing protests by the Iranian people,” Trump tweeted Saturday in English and Farsi.

“There can not be another massacre of peaceful protesters, nor an internet shutdown. The world is watching,” Trump added, referring to an internet blackout that blanketed the country during widespread protests in November.

Iranians in Tehran took to the streets Saturday night to rally against regime, amid anger over the accidental downing of the Ukrainian jet on Wednesday. Protests were also reported in other areas.

The government of Iran must allow human rights groups to monitor and report facts from the ground on the ongoing protests by the Iranian people. There can not be another massacre of peaceful protesters, nor an internet shutdown. The world is watching.

“To the brave, long-suffering people of Iran: I’ve stood with you since the beginning of my Presidency, and my Administration will continue to stand with you,” Trump tweeted.

“We are following your protests closely, and are inspired by your courage,” he said.

AFP correspondents said hundreds of students had gathered early in the evening at Amir Kabir University, in downtown Tehran, to pay respects to those killed in the air disaster. The tribute later turned into an angry demonstration.

Videos posted to social media showed police firing tear gas at demonstrators chanting against the regime and urging Supreme Leader Ayatollah Khamenei to resign and those behind the downing of the jet to be prosecuted.

A BBC reporter said chants included: “Soleimani was a murderer, his leader is too.”

The Fars news agency, which is close to conservatives, said the students chanted “destructive” and “radical” slogans.

Iranians have expressed horror after the head of the Islamic Revolutionary Guards Corps Aerospace division said his unit had shot down the airliner after mistaking it for a cruise missile.

Air defense units ringing the capital had been on high alert fearing that the US would retaliate for a missile attack on bases in Iraq hours earlier in which nobody was hurt. 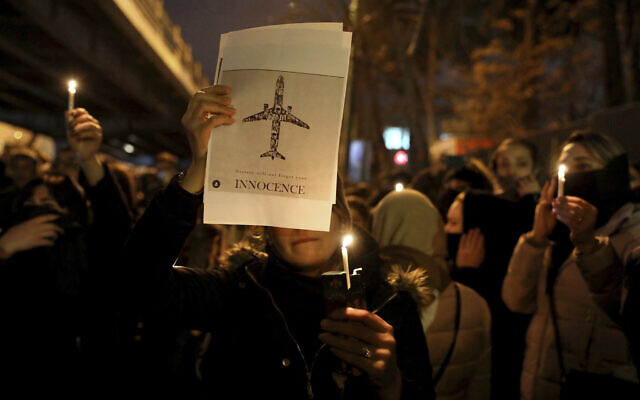 People gather for a candlelight vigil to remember the victims of the Ukraine plane crash, at the gate of Amri Kabir University that some of the victims of the crash were former students of, in Tehran, Iran, Saturday, Jan. 11, 2020. (AP/Ebrahim Noroozi)

The admission followed three days in which Iranian officials vociferously denied shooting down the jet, despite mounting evidence.

“Prosecuting the man who did this won’t change anything. People were happy after we took revenge on the Americans. That feeling has vanished now,” a woman who lives near the crash site told The Guardian.

Iranians had staged an unprecedented show of support for their leadership days earlier in a series of funerals for IRGC general Qassem Soleimani, killed in a US drone strike earlier this month. 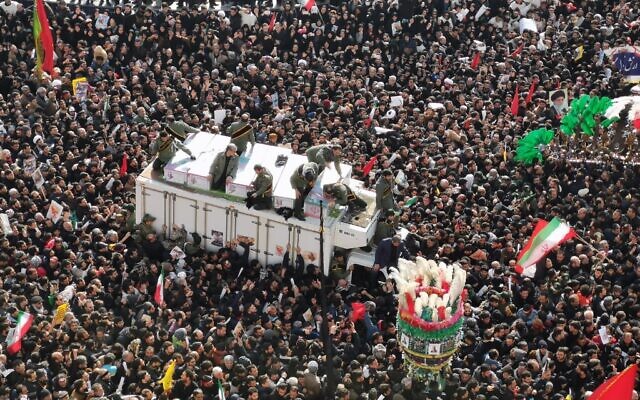 Mourners gather to pay homage to top Iranian military commander Qassem Soleimani, after he was killed in a US strike in Baghdad, in the capital Tehran on January 6, 2020. (Atta KENARE / AFP)

But the shootdown of the plane and the lack of transparency around it, along with the restrained response to the killing of Soleimani, could reignite widespread anger at the country’s leadership that had been quelled just weeks earlier.

Tens of thousands of Iranians took to the streets in November in protests ignited by rising gasoline prices, but which quickly evolved into protests against the regime. Iran has been in the grip of a severe economic crisis since the US withdrew the US from the 2015 nuclear deal and imposed crippling sanctions.

Tehran responded by shutting down the internet, essentially cutting Iran off to the outside world, and violently crushing the protests. Some 1,500 protesters were killed, according to some estimates.