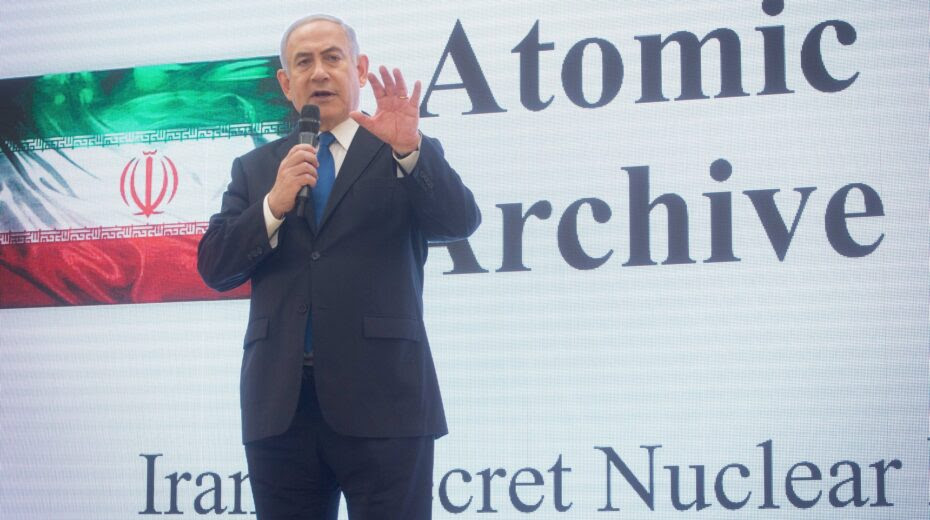 PHOTO: In 2018, Netanyahu let the world know that Israel knew everything Iran was up to, and that the Jewish state would act alone if necessary.

It later appeared Iran had been working on the development of long-range ballistic missiles or even intercontinental ballistic missiles (ICBM’s) at Khojir and that this facility was the target of what seemed to be a new cyber attack.

An American weapons expert said, based on the images she reviewed and that showed a huge orange fireball, that the explosion was in a factory that produces ballistic liquid-fuel missiles.

Jonathan Schanzer, a former US Treasury terror finance specialist pointed to an article in the Intelligence Times that confirmed that the huge blast took place in the Khojir complex in buildings of the Hemmat Missile Industries Factory.

Schanzer thought that Israel could be behind the explosion that some say was a new cyberattack that could have been launched by the IDF’s 8200 cyber unit, I wrote last week.

Hemmat Missile Industries Factory is also responsible for the construction of missile factories in Syria where Iran is converting crude rockets into precision-guided missiles (PGM) in SSM Precision Missile Factories, and Schanzer thought that Israel might have decided to act against the missile threat “at the source”.

It has now become clear that Israel indeed might have decided, after consultations with the government of US President Donald J. Trump, to act within Iran using a network of local spies alongside Unit 8200 and its sub-division, Urim SIGINT Base, which is able to intercept all internet related traffic.

Trump’s envoy for Iranian affairs Brian Hook was in Israel last week and held consultations on issues that were even more important than the Corona crisis, Israeli Prime Minister Benyamin Netanyahu said before the meeting with the American envoy.

Since Hook is dealing exclusively with the Iranian threat, it is reasonable to assume that the two discussed further action against Iran’s nuclear activities and its aggressive actions in the Middle East, where Iran is using its proxies and the Quds Force of the Islamic Revolutionary Guards Corps to expand its influence over certain Arab countries. 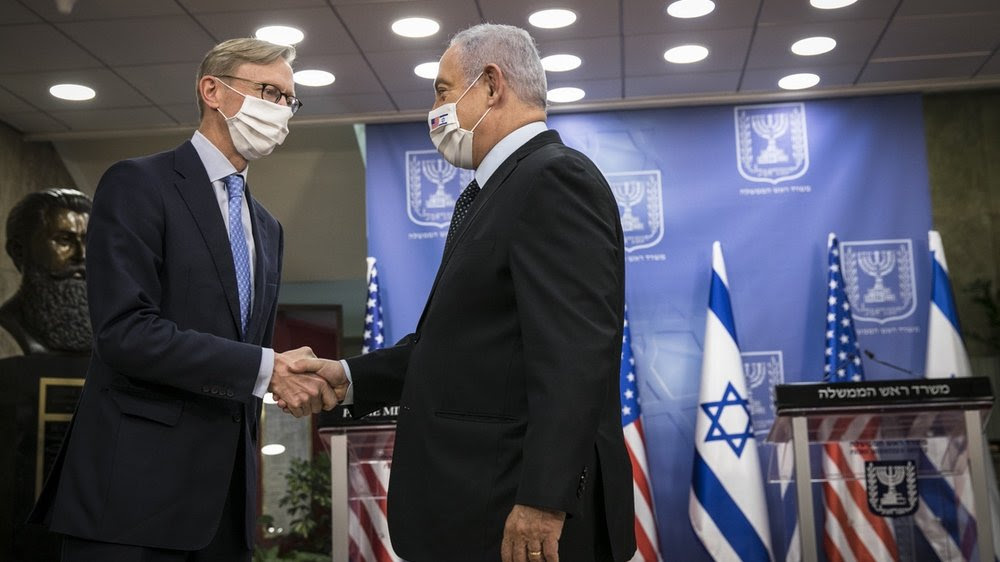 Netanyahu and US envoy Brian Hook forgetting that they shouldn’t be shaking hands. But their reason for meeting was more important than COVID-19.

Less than two days after Netanyahu and Hook met another mysterious explosion occurred at the Natanz nuclear facility in Iran.

In Natanz, Iran is working on developing a new generation of centrifuges that can enrich uranium fifty times faster than the older generation P-1 centrifuges, which were based on technology stolen by an engineer from Pakistan who used to work at the URENCO nuclear research facility in the Netherlands.

“Those were centrifuges that were supposed to be installed underground at the Natanz facility; they were intended to replace the old centrifuges and produce much more enriched uranium, much more quickly,” military analyst Alon Ben-David, who works for TV Channel 13 in Israel, disclosed on Friday evening. 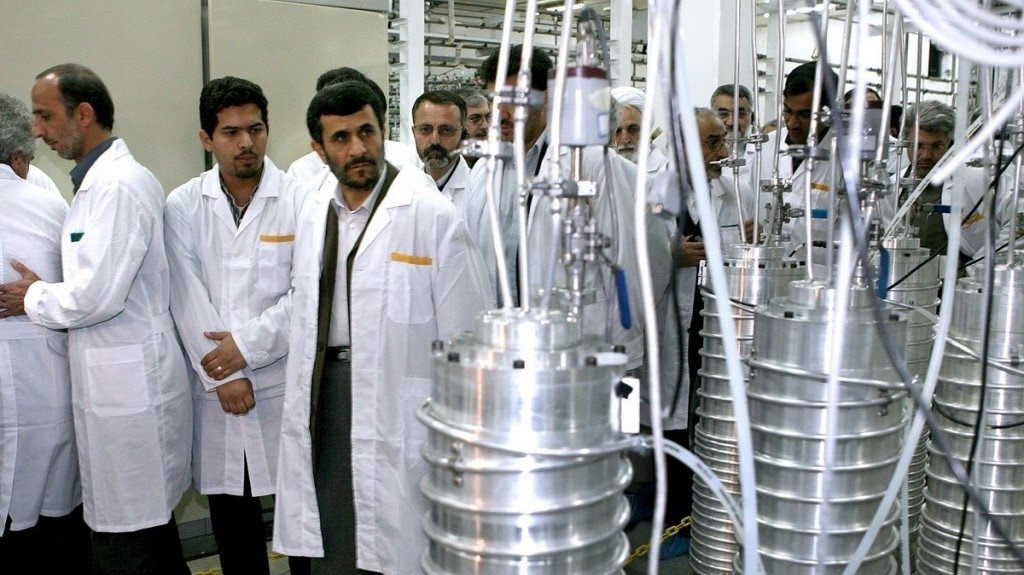 There has been much speculation on what caused the explosion at the Natanz uranium enrichment facility and who could have been responsible for the sabotage.

Three Iranian officials later told Reuters that they think the explosion was triggered by a new cyberattack, and two of them pointed to Israel as the main culprit, but offered no concrete evidence.

The Iranians were unusually open about the explosion at Natanz since they knew inspectors of the International Atom Energy Agency were scheduled to visit the nuclear plant on Sunday and that the extent of the damage would come out in any case.

The Kuwaiti daily Al-Jareeda furthermore, published an article in which it quoted an unnamed official who confirmed that the explosion in Natanz was caused by a cyberattack, but also reported that Israeli ADIR F-35 stealth warplanes had bombed the nuclear facility.

Al-Jareeda has a dubious reputation, however, after it published a series of reports about alleged Israeli military actions against Iran that couldn’t be verified independently.

When Prime Minister Netanyahu was asked about possible Israeli involvement in the attack on Natanz, he replied: “I don’t address these issues.”

His new Foreign Affairs Minister Gabi Ashkenazi was a little bit more informative when he said “Iran cannot be allowed to have nuclear capabilities.”

To that end, Ashkenazi added, “we take actions that are better left unsaid.”

Then there was The New York Timesthat published a report quoting two experts who claimed Israel had managed to plant a bomb inside the factory producing the new type of centrifuges.

“A Middle Eastern intelligence official with knowledge of the episode said Israel was responsible for the attack on the Natanz nuclear complex on Thursday, using a powerful bomb. A member of the Islamic Revolutionary Guards Corps who was briefed on the matter also said an explosive was used,” The Times reported. 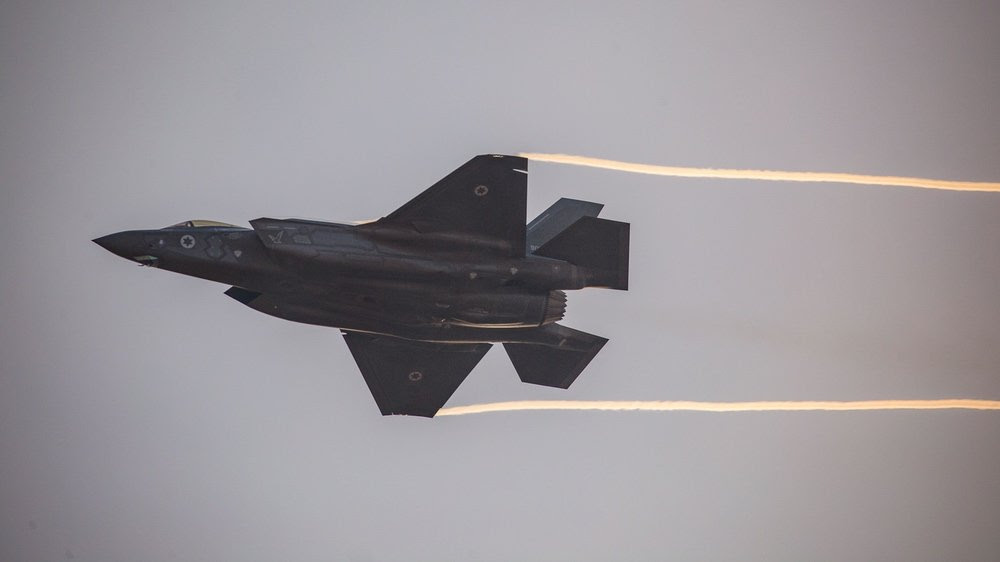 Arab media has gone so far as to suggest Israeli F-35s flew across the entire Middle East and bombed Iranian facilities.

During a meeting with the press via Zoom former Mossad head of analysis Sima Shine said the main goal of recent actions against Iran’s nuclear weapon program is preventing Iran from making more progress in its drive to obtain nuclear weapons.

The Iranians now admit that the explosion at the centrifuge assemble unit at Natanz has caused a “slow down in the development and expansion of advanced centrifuges,” according to Behrouz Kamalvandi, a spokesman for the Atomic Energy Organization of Iran.

“There were advanced equipment and precision devices at this site that were either destroyed or damaged,” Kamalvandi said.

Israel seems to have instilled a feeling of insecurity within the Iranian nation by effectively demonstrating Netanyahu’s message that the Israeli security forces know exactly what Iran is doing and where Iran is doing it. Netanyahu said this in 2016, when he addressed the General Assembly of the United Nations about Iran’s growing threat via Hezbollah in Lebanon.